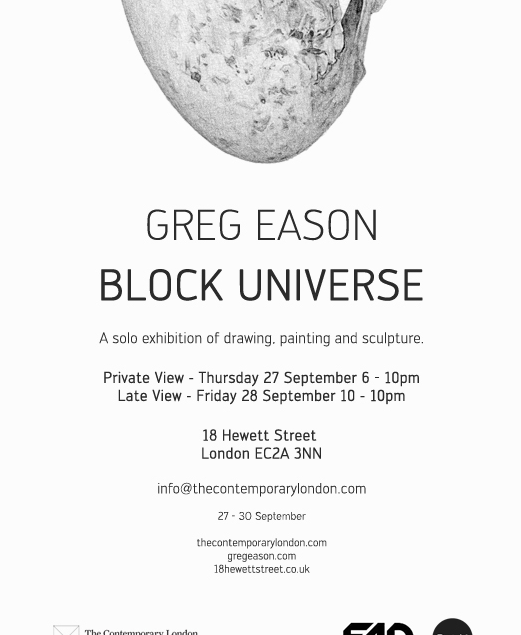 The recurrent themes of mortality, spirituality, Anthropocene, religion and the apocalyptic also continue in Eason’s newest body of work. However, Eason now delves deeper into the ontological nature of time, deriving from Albert Einstein’s work on the theory of relativity. The artist states, ‘For the most part of this year I’ve been fascinated with time theory. It all started with a fictional story titled Chronopolis by JG Ballard and an accidental encounter with an interview with British physicist Julian Barbour. Within both ‘time’ is presented as being abstract, unstable and ultimately void.

‘Within the Block Universe all points in time are in flux and equally ‘real’. It exists as a fourth dimension within the universe, and opposes the theory of a flowing time that sits alongside the universe uniformly without reference to anything else.’ Eason presents us with a body of work that distills ideas and hovers, where surreal objects are void of time and situation.

Whilst Eason’s practice remains primarily pencil based, juxtaposing isolated, intricate, elaborate and obsessively detailed figures and symbolic objects with expansive space, ‘Block Universe’ also sees Eason’s first experimentation with sculptural forms and media. Eason has embarked on a journey of exploration, working with sculpting materials such as concrete and resin to bring his drawing into three dimensional form. This exhibition also culminates from a new working process, using Maya to generate CGI. He explains, ‘I would always use photos before, but the process of building imagery and compositions in Maya completely opens things up; I can dictate angles, depth and light positioning, the imagery can be manipulated into just about anything I want.’

We would be delighted if you could please join us for Greg Eason’s highly anticipated solo exhibition Block Universe featuring new drawings, paintings and sculpture.