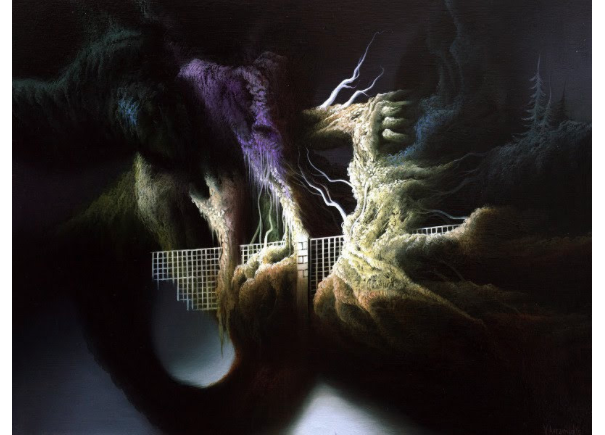 Oil painter Vasilis Avramidis, first featured in Hi-Fructose Vol. 26, produces modern portraits of isolated landscapes, often depicting architecture in states of overgrowth. At the time of this interview, Avramidis confessed that he has settled in to his third studio location this year, a small studio in northern Greece. It is here that he has been putting the finishing touches on a new group of dramatically lit scenes based on memory and the overlooked. According to Avramidis, these paintings are as much about creating a familiar sense of place within a moment as they are about the absence of humans within the architecture. His latest works will be on view at The Contemporary London, located at Space W10 which opens on November 13th.

HF: In your feature in HF Vol. 26, we find out that you are from Greece originally and moved to London for graduate work in painting. Where is your studio located these days?
VA: I have changed three studio locations during this year. This interview finds me in a rather small studio in northern Greece, where I completed the last paintings of the series. However, my studio location does not play an immediate role on how the work evolves, as my research material comes from specific places. For example, for these latest works, my research involved visits to the National Gallery in London, the Wallace collection, Tate Britain and the Fitzwilliam Museum. There is of course a lot of on-line research involved as well.

HF: Tell us a little about your artistic background. What were your first influences to be creative and become a serious artist?
VA: Like most other artists, there was a point when I realized that this is the only thing that made sense to me as a way of life, and I started pursuing it. I decided it when I started looking at art. At that time, my influences were mostly contemporary and modern art. Nowadays I have equal interest in contemporary art as well as in art from the 16th or 17th century, which has made everything even more interesting.

HF: Your images feature architectural scenes that have either become derelict and overgrown by nature- or perhaps the structures have accepted nature as a collaborator. Which is a more accurate viewpoint?

VA: You can say it’s a conception of a landscape idea, where memory as well as the actual experience of a certain environment produces an equally important impact. There is a strong human absence in the architecture.

HF: What does the concept of “Outskirts” mean to you and how did the idea come about?

VA: “Outskirts” is about memory and the overlooked. The title is inspired by the outskirts of cities, a transitional landscape with a unique relation to visual memory, as these areas are mostly encountered repeatedly, usually as fleeting images when you are traveling. They are very familiar, although few people have actually walked through them, as they don’t present any obvious interest practically or visually.

HF: Your paintings, including these new oil paintings for “Outskirts,” feature scenes in a state of quiet repose, as if we are looking at something in its natural habitat by shining a spotlight it. Where did these ideas begin?

VA: They began by studying certain aspects of art history, and employing the atmosphere of art genres and historical paintings to elevate quotidian contemporary images that live in our memory as fragments. I did this in an effort to produce a personal kind of landscape language that even though it seems familiar, it’s not certain whether this familiarity comes from the subject matter, the way it’s painted, or the very medium and format of painting.

HF: What would you say is the main message of your works?
VA: I wouldn’t say the works carry a message, or that they could ever become any sort of critique on something. They are a kind of study about the possibilities of a medium with a historical depth, such as painting, to address contemporary but especially diachronic concerns on the human condition, without taking a position for or against something. They want to become an experience themselves, rather than a critique on something, and hopefully open a dialogue with other forms of painting.

HF: Do you think in terms of scale, the size of the work, when you start a new painting? Do you find that the dimensions of a finished work affect the idea itself?
VA: They certainly do. A painting’s size is not a random decision. I have been working on small and medium sized panels lately, mainly because that’s what the subject matter needed, and because I was recently studying certain paintings at museums in the UK over and over, which all happened to be on small sized panels, so this was an element I decided to incorporate into these transformed landscapes.

HF: You’ve mentioned that you invest quite a bit of time into research and planning out each painting. Now that this new body of work is complete, do you take any time out before preparing new works?

VA: There is rarely a significant time out from work, mainly because every complete painting creates a kind of problem that needs to be solved in the next one in some way. They become a sort of chain in a sense, although problems go back and forth. It’s more like a circular process, rather than a linear one.

HF: Tell us a little about what you have on the horizon, and what you look forward to.
VA: At this moment, I am trying some new things to prepare for a new series. I’ve started by putting away some failed attempts, while starting another painting that I will hopefully complete. The current exhibition “Outskirts” is now my third solo show in London, and I will be showing a new group of works in Tokyo, hopefully next year.